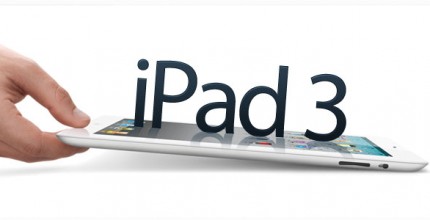 If we call iPad good and iPad 2 great, then iPad 3 would definitely be fantastic! The iPad 3 will feature a new, thinner, and sleeker design. Lots of highly expected features will be see on the new iPad 3, including 9.7-inch Sharp-manufactured 2048x1536 retina display, A6 Quad-core processor, 5MP camera with 1080p video recording quality, latest iOS 5 and probably Siri.

For those who have Keynote installed on the Apple iPad 3, you’re able to open PowerPoint file using Keynote, after you have transferred PowerPoint files to iPad 3 using iTunes.

In iTunes, tap on the “Copy” icon to transfer your PowerPoint files to iPad 3. Once you import them, there may be some dialogs boxes which come up saying that several features such as fonts, animations, transitions etc. may not be supported through Keynote. You need to simply click on “Done” to make them go away. Then you will be able to view and edit PowerPoint presentations on iPad 3 using Keynote.

The restriction of this solution is that some of the features like animations and transitions will be removed when displaying the presentation.

The disadvantage is that no animations, no transitions, and no sound and video clips will be preserved.

The iPad 3 is a great platform to read PDF files in a tablet style with the help of a few applications designed for iPads such as CloudReaders or Easy PDF. If you don’t know how to convert PowerPoint to PDF, you can refer to the 3 frequently used methods to save powerPoint as PDF for free.

Just like saving PowerPoint as images, all the animations, transitions, audio and video clips will disappear after converting PowerPoint to PDF.

In 3 steps, your PowerPoint can be converted to an iPad 3 supported video formats:

Then you can transfer them to iPad 3 with iTunes for watching.

All the animations, transitions, sounds, video clips and narrations will be retained after converting PowerPoint to video for your iPad 3.

In this method you also need to convert PowerPoint to video first since YouTube only accepts video formats like MP4, FLV, AVI, WMV, etc. One of the advantages is that you can easily share your PowerPoint presentations with more people who have iPads. The iPad 3 can access to YouTube and most other video sharing web sites, so you can upload your PowerPoint to YouTube for watching with Internet connection.

There are a few websites which supports PowerPoint formats, so you can directly upload PowerPoint files to the Web. The authorSTREAM.com is one of them, which enables you to upload and share PowerPoint with your friends online. The best part is that you can download the PowerPoint as video and publish to other sharing websites like YouTube.

Viewing PowerPoint on iPad 3 via PowerPoint sharing sites is a good idea. However, it will retain some of the animations, but all the transition effects, audios and videos you inserted to the PowerPoint file will be lost.

Enjoy viewing PowerPoint on iPad 3 with these 6 ways for playing your PowerPoint presentations on iPad 3!