How to View PowerPoint on Samsung Galaxy S


The Samsung Galaxy S is an Android Smartphone debuted in March 2010. By January 2011, it has sold 10 million globally. The Galaxy S was even named the European Smartphone of the Year at the European Imaging and Sound Association (EISA) Awards 2010-2011.
It features a 1 GHz processor along with 8-16 GB internal Flash memory and a 4-inch AMOLED touch screen, which is large and ideal for video chats, video playback or surfing the Internet. The 480x800 pixel resolution is high enough for you to see the image’s details, and it makes watching movies, TV shows or even playing games much more enjoyable.
There is a 5MP camera on this device, which is able to record 720p HD video at 30FPS, but for higher quality, it’s better to be at least 8MP camera. This might be the only “weakness” of Samsung Galaxy S.
Nowadays the world is filled with movies and music, so every new Smartphone is bringing us with fresh multimedia experience. Samsung Galaxy S’s multimedia player is far better than the others’. It supports MPEG-4, H.264, H.263, Divx, Xvid, WMV, AVI, MKV and FLV, etc.
It seems like viewing PowerPoint on portable devices has become popular. There are lots of questions about how to view PowerPoint on Smartphone or tablet. What about Samsung Galaxy S?
Two methods are available for viewing PowerPoint on Samsung Galaxy S.
Since Samsung Galaxy S is based on Google’s Android open source platform, you can use this application called ThinkFree Office Mobile for Android to view PowerPoint. ThinkFree is trying hard to be compatible with Microsoft Office, now it can open files from Microsoft Word/Excel/PowerPoint 97/2000/XP/2003/2007. But Microsoft is so popular that as a follower, ThinkFree is always left behind. So problems may happen when users make PowerPoint presentation using some unique features of Microsoft PowerPoint.
However, another method is open for you. With the PowerPoint to Samsung Galaxy S video converter, all your PowerPoint original elements like animations, transitions, video clips, sounds, fonts and languages will be preserved. As a format converter, Moyea PPT to Video Converter is much easier than ThinkFree to be fully compatible with Microsoft Office. It supports all Microsoft PowerPoint versions, including PowerPoint 2010.

Besides, it is quite easy to convert PowerPoint to video for playing on Samsung Galaxy S. All you need to do is to add PowerPoint file, choose a video format and start conversion. 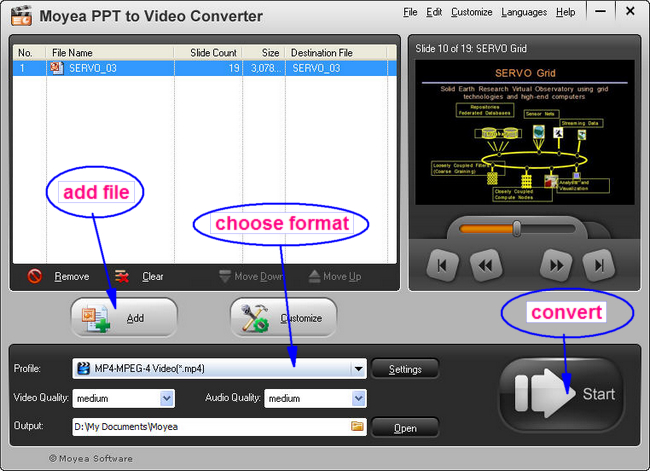 Very soon you can transfer the output video to Samsung Galaxy S and enjoy it.